“I won’t sleep. I won’t eat healthily. Maybe I will hold off on this certification?”

This is from a coaching client who had been excited about getting a key cybersecurity certification that will help her move into a role she has been coveting AND increase her salary.

So why was she thinking of putting it off? Why was she anticipating she would not eat well or get sleep?

The answer … studying for this certification reminded her of being back in college.

In college, her modus operandi, when it came to preparing for tests, was to set up a study plan and then not follow it.

Instead, she would wait until the last minute and then cram. This meant staying up for 72 hours straight, stressing out and not eating. She would arrive to the exam overtired, hungry and positive she would not pass.

And now she had brought this habit of putting off and then cramming at the last minute into her career.

Why? Because she believed it was the Energy of Procrastination that got her across the finish line.

If I Don’t Use The Energy of Procrastination How Will Anything Get Done?

If you are doing something that you don’t want to do but you keep doing it, you must be getting something out of it. There must be some reward, or you would not do it.

The reward of procrastination is that it creates a severe deadline and then amps up your energy so you can accomplish what you committed to accomplishing.

Beyond the reward are the costs.

There are lots of tactics to help with procrastination: setting up goals, changing up the environment, having rewards for milestones, tracking results, keeping the payoff in mind and more.

I suggested she keep it simple and focus on 1 tactic … changing the energy she was bringing to her circumstance.

We brainstormed about what other types of energy she might tap into Instead of Procrastination Energy.

She landed on Fun Energy. She decided to make the whole event fun. This meant she was going to add great music and take dance breaks, she was going to order her favorite foods and get a friend to send her dog and baby videos at different points while she studied. She spread out the studying over a longer period of time and for shorter amounts of time so she could schedule fun times with her boyfriend.

By the end of our session, she was excited about the exam and was not going to put it off. She had used energy shifts to shift her approach and break a limiting habit.

What “bad” career habits do you have that cost you more than you are willing to pay?

How can you create a new vibe that feels more peaceful, fun and healthy and still get accomplished what you need to accomplish?

Changing habits can be challenging. Having a coach alongside you makes it so much easier.  Sign up for a Career Strategy Session for that extra bit of support! 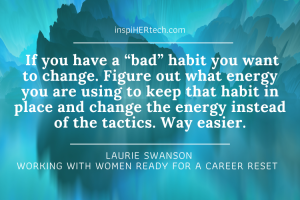