Are You a Vending Machine For Your Team?

Are You a Vending Machine For Your Team?

“I was the vending machine of answers for my team. And I was exhausted!”

This is from a coaching client with whom I just completed an iPEC Energy Leadership Assessment Debrief.

We were talking about the different levels of energy a person might experience both on a normal day and when they were under stress.

She was typically someone who was upbeat and able to see lots of opportunities. She was a great connector of ideas and could recognize patterns in seemingly disconnected events.

This meant that she was often the go-to person when there was a problem to solve.

She said she felt like a vending machine. Someone on her team would put in a “dollar” in the form of a question, and she would, as expected, vend an answer.

For a long time, she loved this feeling of being able to help others solve problems … until she didn’t.

Instead, she was feeling exhaustion, overwhelm and resentment.

She knew something had to change so she did an experiment.

For 3 weeks, and without telling her team, she only let herself ask questions. No answers ever.

Team member: I am having trouble with the data I am getting in the query. What should I do?

Leader: What have you tried so far?

Team Member: I did this and then that, but it is not working. What would you do?

Leader: Let’s break this down. Given what you have tried so far, what might be the next logical step you could take?

You get the gist. The only thing her personal vending machine could dole out was another question.

In just 3 weeks she saw huge shifts. Not only in herself but also in her team.

She noticed that they were trusting themselves more. They had a confident vibe that had not been there in the same way before.

And she saw them coming to her less.

Which meant she was no longer doing their work for them. She had released some invisible workload which reduced her stress and left her feeling more energized.

By shifting how she was using her energy she could now focus on things that she had not had the time to focus on before. Things that were more directly aligned with what she was excited about and filled her with meaning.

Are you interested in learning about your Energy Leadership profile through the research-backed iPEC assessment, let me know? I will begin scheduling Energy Leadership Sessions starting in November. Get on the waiting list HERE. 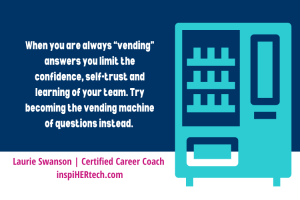