How to Change Your Career Circumstances

How to Change Your Career Circumstances

I have gone down a rabbit hole. I admit it.

I have become obsessed with figuring out how to uncover limiting thoughts that get in the way of living a life and having a career that is in complete alignment with our True Nature-that which we are uniquely qualified for and meant to be doing in the world.

I was on a recent webinar through 1871 and the guest speaker was Phil Wilkins. Phil has written a book called Purpose First Entrepreneur.

In the course of the discussion, he talked about overcoming our negative biases.

Yep! Those conscious and unconscious beliefs get in the way of living our lives from our True Nature.

I asked Phil how he helped entrepreneurs uncover those things that are getting in the way of their success. I loved his answer.

He said that he has them look at where they are performing poorly and then understand why.

How to Change Your Circumstances for the Better

When I heard Phil say this, I was reminded of a simple coaching framework I learned during my certification.

Kind of like Einstein’s quote that the definition of insanity is doing the same thing over and over and expecting a different result.

Try this simple exercise to change up your life!

Step 1: Pick ONE circumstance in your career that is less than desirable right now.

Step 2: Back up a few steps and list the actions that led to the circumstance

Step 3: Back up even further, list the thoughts you had that led to the actions you took

Step 4: Look at those thoughts and actions and pick one thing you might do differently going forward.

Let’s say you got laid off. You might think that the circumstance was out of your control.

Often people tell me that they knew things were unstable at their company but they hoped that things would turn around or they would not be part of the layoff.

If a different action had been taken when the thought “Things are not stable here, I could get laid off” occurred the circumstances would look different right now.

Actions like updating your resume, hiring a career coach, attending a few networking events would have you 2 steps ahead of your competition and feeling far more in control of the situation.

Is now the time to hire the best career coach, me?  Sign up Take Charge One-on-One coaching and change your circumstances for the better. SIGN ME UP! 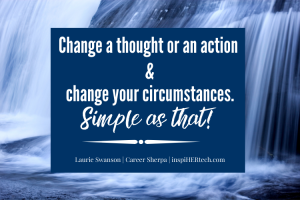