What is Your Career “Bad Beat” Story?

What is Your Career “Bad Beat” Story?

I was recently listening to an interview with Annie Duke talk about her new book:
Thinking in Bets: Making Smarter Decisions When You Don’t Have All the Facts.

Annie has a degree from Columbia University in English and pursued a Ph.D. in psychology at the University of Pennsylvania, focusing on cognitive linguistics, writing her dissertation on a hypothesis of how children learn their first language called “syntactic bootstrapping”. For her graduate studies, she was awarded a National Science Foundation fellowship. She has written several books, started the non-profit Ante Up for Africa with actor Don Cheadle and in 2014 Annie founded How I Decide, a nonprofit to help young people develop the essential life skills of critical thinking and decision making.

And one of the things she did, in order to become a success was to give up her Bad Beat Story.

What the heck is a bad beat story?

In poker, there is something called the bad beat story. Every player has one. They are all a variation on the same theme: “I had the best cards and lost!”

For those of you who know poker say it with me “Now that’s a bad beat!” If you are not a poker player ask someone to explain this to you.

Annie admits she could tell a Bad Beat Story with the best of them. A story where she was the victim of bad luck. When she told her bad beat story, she evoked what she describes as the Confirmation Pattern of Thought with the person to whom she told her story.

The confirmation pattern is when the person she told the story to would commiserate with her and then come back with a Bad Beat story of their own continuing the cycle of victimhood, justification and off-loading of personal responsibility.

Until the day she told her Bad Beat Story to Erik Seidel, a longtime friend of the family and an American professional poker player himself. Erik has won eight World Series of Poker bracelets and a World Poker Tour title. Think 8 Wimbledon Titles or 8 heavyweight boxing championships.

When Erik talks to you about poker you listen.

And what Erik said changed everything for her. In essence, he said that he did not want to hear her Bad Beat Story. He had heard more than his share over the years. When she was ready to talk about what she could learn from what happened and better strategies for the future then come see him.

Annie describes this as a shift from the Confirmation Pattern of Thought to the Exploratory Pattern of Thought. This is the idea that instead of looking for someone or something to confirm your current story and current beliefs, you instead make a decision to explore where the story you are telling yourself might be incorrect and open yourself up to learning new ways of doing things.

It is the old idea of the definition of insanity is doing the same thing over and over again and expecting a different outcome.

The challenge Annie says, and this is based on research she has compiled from top universities and experts in this field, is that people naturally want to avoid pain because…well…it is painful. It’s easier to tell a Bad Beat Story and get people to join you in confirming how you are right to feel victimized and it wasn’t your fault than to feel the pain of having possibly made mistakes leading to the undesired outcome based on your own decisions.

Yes, you can avoid feeling the pain in the present but the consequence of this pattern is that you will keep doing what you have been doing, getting the same outcomes and sharing the same sob story.

You shortchange your better future by not feeling the pain now, avoiding looking at how you contributed to the problem and what you might have done differently to achieve a better outcome.

As a recruiter, I have heard many Bad Beat Stories in my career:

Catch yourself fast when you are justifying and create a new story going forward.
It’s time to change your Bad Beat Story to an Upbeat Story.

Put on your Bad Beat Antennae-Make a conscious effort to take responsibility for all your bad outcomes. Be alert. Catch your stories you tell yourself and others in order to avoid feeling pain.

Become the Observer-take a look at your Bad Beat as if you were not the one who actually made the bad decision but as someone who is trying to help someone else who made a bad decision. Using compassion, not victimhood, as your guide and let the learning begin.

Build an Upbeat Tribe-get together a group of people who can hold each other accountable for not living in a Bad Beat Story. A tribe where you give and receive truthful, helpful and kindly-delivered advice with the objective of learning from your mistakes and growing into a more successful and happier person.

Have a WHAT IF Party-get a group together to go through past mistakes and dissect them for learnings. Leave defensiveness at the door, be open to all ideas and have fun!

Example:  For years, I have a bad habit of running up my credit card, then paying it off, then running it up again, then paying it off again etc. Even though I always seem to pay it off I HATE this cycle. It is stressful to me.  I truly want to live within my means and never carry credit card debt but I recognize I have a blind spot here. I continue to do the same thing getting the same results thinking this time I will not use my credit card again.

My Bad Beat Story has been that because I am a straight-commission sales person with inconsistent income or steady salary I cannot possibly plan for my spending.

Recently, I had an opportunity to question my bad beat story. I was at lunch with a woman know who does bookkeeping for small businesses and I decided to try the WHAT IF game with her. I decided not to be defensive and a victim but to be curious instead.

What if she had a client who was constantly running up credit card debt then paying it off then running it up etc. what would she do? She said she would recommend a book that she considers her business bible that has helped her live within her means without feeling constrained in any way. I am now deep into the book and will report on the results of this in a later blog but what this gave me was a new way of approaching a problem. I feel excited about the possibility of losing this bad beat story once and for all.

LET’S SET UP A CAREER STRATEGY SESSION AND CHANGE YOUR CAREER BAD BEAT STORY TO AN UPBEAT ONE. 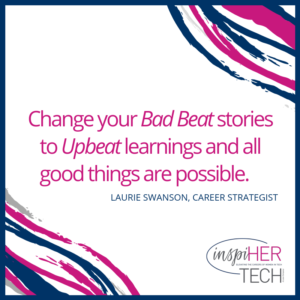