Is Your Imagination Scaring You?

Is Your Imagination Scaring You?

I was in my car going to do some grocery shopping listening to Comedy Central on Sirius radio when Andy Woodhull came on. I had never heard of him but I was ready for a laugh and he delivered.

Just as I arrived at the grocery store, he started telling a story of how his youngest step-daughter told his wife that her imagination was scaring her.

I did not hear the punchline so I’m not sure what happened but the idea that our imaginations scare us hit home.

I kept thinking about that as I moved through the aisles.

It reminded me of another famous quote that anyone in Alcoholics Anonymous knows: One day at a time.

This is a strategy used to keep addicts in the moment so that they don’t start going down a path of self-destruction. I have even heard recovering addicts say it is not just one day at a time for them but one hour at a time, even one minute at a time.

Because when you start to go too far into the future you can scare yourself!

My imagination can tell me that my pain in my arm is the beginning of a heart attack (or maybe it is because I slept on it wrong but still…I could be dying).

My imagination tells me that my kids are never going to find a job because they are not computer programmers.

My imagination tells me that I will never make another sale and will have to end up selling my house and living with my parents. 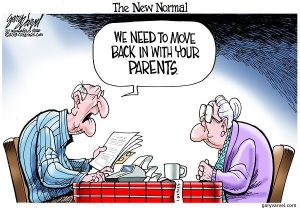 Your imagination is making your job search scary!

I have heard candidates tell me that they will never get hired because:

And on and on…

Nothing has happened yet but they are letting their imagination scare the heck out of them.

Here is a crazy thought-instead of imagining the worst outcomes- use your imagination for your benefit. The real power of your imagination is the fact that it allows anything to be possible.

The next time you imagine freezing at an interview-take the thought further and imagine yourself smiling and saying “That is a great question. I don’t think I have ever thought about that before.” You are not freezing but instead, you are stalling until the answer you need comes to you.

The next time you find yourself imagining that you do not have the right skills for the job market turn that around and imagine the hiring manager beaming at you as they say, “You were EXACTLY what we were hoping for in our next hire.”

Imagine the offer being more than what you had targeted.

Imagine yourself a year on your new job surrounded by people you enjoy working with doing work that inspires you.

Imagine yourself not being scared by your imagination but being supported by it.

Imagine how much more peaceful and happy you will be feeling in every moment.

Imagine me supporting you in your next job search. It can happen. All you have to do to make this your reality is to schedule a Career Strategy Session. 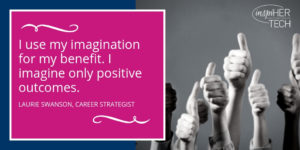