I have a coaching client who has taken what some might say is a non-conforming path in her career.

Almost the first thing she said when we talked was that she never chased money in her career. She intentionally went after roles that she felt made her a more well-rounded person.

She would take on new roles that built her skills and talents and that she felt added to her career even if they did not add to her pocketbook.

And now she is making bank at Google.

When she described her career trajectory, I loved how she explained her path. She said the roles came to her and she followed what seem like the next best step for her though not necessarily a traditional choice.

She started at a pizza company where she learned teamwork.

Then she became a barista where she learned service.

Then she took her career into project management and became a better communicator and presenter to executives.

She then had a time working at an emergency response company where she learned how to work calmly under pressure.

She is now a program manager who is creating order out of chaos. She excels in the ambiguous. She recently added working with external partners because she knew it would strengthen her negotiation skills.

Yet she is getting antsy. She is ready for a change. The issue is that this time around she is not sure where to take her career next. Things felt very clear to her before but now … not so much.

She has questions. Should she stay with Google? She has built a nice reputation there and it offers stability, especially in today’s market.

Or maybe she should join a scrappy start-up that will love her breadth of skills.

Plus, she is comfortable in program management, but it doesn’t light her up like before.

She is yearning for leadership and to “own” something but how does that translate to her next career move?

The big question we are tackling is how to take all the fantastic skills and talents she has developed over her career and leverage them while at the same time making sure that what she does next satisfies something deeper in her. She isn’t just looking for a job.

What she is really looking for is a Career Reset!

We are stepping back, taking an eagle’s view of her career, reconnecting with her desires and using her inner guidance to reimagine all kinds of possibilities BEFORE she reinvents her career by taking any active steps forward.

There are times when the next career move is so apparent and you go … and then there are those times when everything looks clear as mud.

All you know is that you want different. But what? When? How? Why? Where?

When we feel this type of career confusion often, we want to go right to the action. There is no denying that action can bring clarity.

But moving to action before you take the time to reflect and reconnect with what really matters leads to wasted time, self-doubt, angst and exhaustion.

If you are feeling similar to my coaching client, then the first thing you are going to want to do is to become a non-conformist, and the first step in your Career Reset is to DO NOTHING.

Nothing that feels like things you HAVE TO DO or things that FEEL LIKE A BURDEN THAT YOU ARE RESENTING. Do nothing that exhausts you even when you think about it.  Feeling the “have to’s”, resentment or just plain tired are all signs you moved into action prematurely. Follow the signs. Do less. This is a time of small moves. This is a time of listening. Get quiet, take a walk, get a coach to talk things through with, and relax.

Creating a Career Reset starts with doing nothing. Doesn’t that sound like all kinds of wonderful! In a Career Reset you allow your next career move to come to you.

Are you ready for a Career Reset? Does the idea of working alongside other women as they reconnect, reimagine and reinvent their careers sound like all kinds of fun? It does to me. This is why I will be launching the Career Reset Group Program in February.

Learn more and apply for a Career Reset 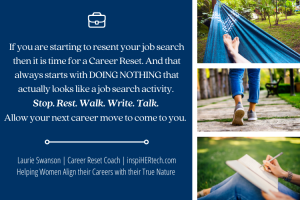