Labor Day was a Fight for Equity & Inclusion

Labor Day was a Fight for Equity & Inclusion

THIS IS A REPLAY OF A PREVIOUS LABOR DAY BLOG. Great Advice Twice!

We recently had our windows replaced and we were removing memorabilia off of a shelf in my son’s room. One of the things I found was an old bookmark he must have received in grade school with a poem on it called, “If All The Trees Were Oaks”.

As I was reading the poem it made me think of the Labor Day holiday and its ties to equity and inclusion. How having a whole office of oaks would be…well, boring.

Labor Day, Equity and Inclusion…Oh My!

Like me, if you celebrate Labor Day with picnics and friends yet have forgotten the why behind this holiday, here is a quick recap.

Labor Day is the worker’s holiday that came out of great strife and mistreatment by businesses of workers, especially immigrants, in the late 1800s.  Not including others fairly and equitably goes way back.

According to History.com, Labor Day resulted from the harsh changes happening as America moved from an agricultural to an industrial society.

Factory working conditions were unsafe, the pay was abysmal, and immigrants and the poor were taken advantage of – working 12-hour days and 7-day weeks. They were barely getting by financially.

This led to marches and strikes by workers across the US and Canada against unfair practices. A key turning point in the US for the worker was the Pullman Palace Railroad Strike in Chicago involving over 250,000 workers across 27 states. This strike lasted over 2 months and held up freight and passenger trains west of Detroit. Over 30 deaths were attributed to the strike. In an effort to get trains running again, President Grover Cleveland sent in the Army to break up the strike resulting in more deaths and chaos.

When it was learned what happened Grover Cleveland realized he had to do damage control. This led to Congress passing legislation to have a National Worker’s Holiday just 6 days after the end of the strike. Grover Cleveland later signed it into law.

And what about the bookmark?

As I was reading the poem, I was struck once again by how important it is to have a team and a company that is made up of a diversity of trees.  The trees need to feel included-provide them sunlight, water and nourishment. Help them grow so we can all enjoy the various fruits of their labor.

This Labor Day celebrate diversity and inclusion by remembering the hard-fought achievements of immigrants to have equal pay and reasonable hours for which we benefit and recognize that the fight is not over. 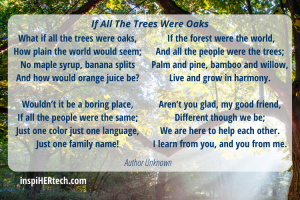