Should I Change Jobs to Make More Money?

Should I Change Jobs to Make More Money?

I was asked recently asked to give my opinion on how someone can determine if they’re being underpaid at their current employer.

This isn’t new of course but, given the market today, companies are scrambling to fill their open positions.  They’re doing whatever they can to hire talent.

Paying premium dollar, giving sign-on bonuses, extra vacation and other perks that, if you were hired 3 years ago, you may not have been able to successfully negotiate.

And current employees are left wondering if they are leaving money on the table by not switching jobs.

Let’s go back to 1999. The Year 2000 was upon us. I was recruiting during this time and companies were hiring tech people like crazy. Everyone was predicting that, when the clocks rolled over to January 1, 2000, all our systems were going to crash.

Chaos was going to ensue.

The name of the game was to hire lots, hire fast and pay whatever was necessary.

My Favorite, Most Frustrating Client

I had this client who drove me crazy.

They had a salary range mapped out for each of their roles.

The hiring manager made it very clear to me that, while money was important and they wanted to pay a fair market rate, they were not going to “buy” people. They wanted people to join their company because they were excited about the tech, the projects, liked the team and their mission. They believed that this led to more engaged employees and long-term retention.

While all their competitors were figuring out ways to get around the salary bands by hiring less experienced people and giving them the senior title and salary, for example, my client was not budging.

Many recruiters would not work on these searches. This was a difficult job for recruiters when you are competing against other organizations that are offering the moon.

But I appreciated the stand this company took. I knew there were people out there who would also appreciate this perspective.

I placed a lot of people at this company over the years. Many who stayed over a decade. As predicted, the turnover for those companies who were offering the world was significantly higher after the Y2K craziness settled down than for my client.

Why? Because money does not buy you engaged employees, fun projects or great work culture.  You may make more this year and the next but, in the long run, your resume could be adversely impacted by job hops, your health compromised and your joy and family time diminished.

So Shouldn’t I Negotiate for More Money?

Back to the original question I was asked.

What do you do if you are in a company that is buckling under the stress of the current market and making crazy offers and blue sky promises to new employees while you train them, help them succeed while only receiving that 2% increase!

You need to negotiate.

Now is the time. Not only do companies need to hire they also need to retain.

If you like where you work, the work you are doing and who you are doing it for do not be hypnotized by the money grab. Make things work where you are and have your company pony up for what is fair.

Then get time on the calendar of your boss and ask for a raise (and other perks)  to match your peers and the current market. You are a known quantity to them, so you have leverage.

If I had worked for my frustrating client, I would have felt good knowing that I was not being ignored and undervalued just because I was not the new kid on the block. Those being hired next to me were in my pay range and had similar skill levels.

You do not have to switch jobs to take advantage of today’s market (unless you want to of course-it is an ideal time to switch as well-but don’t do it only for money).

Negotiate now because is an opportune time to do it and because you are worth it!

Let’s talk through how to negotiate and what you can ask for. Sign up for my Negotiation Strategy Session and let’s keep working where you love making more money!  I’m In! 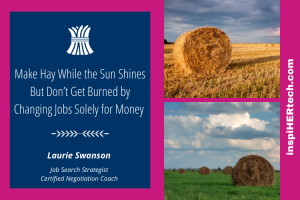