Career Tip: Be Bold! Say No!

Career Tip: Be Bold! Say No!

It seems like in this day in age we are all about saying yes.

Shondra Rhimes, the creator of Grey’s Anatomy, wrote a great book called The Year of Yes.

I have friends who have declared that a personal goal is to yes to what anyone asks of them as long as it is not illegal or harmful.

And I think this is great.

Saying Yes can force you out of your comfort zone. It may require you to be brave and face fears. It has you taking action, I am all for that. Yet…

Saying No Has Its Own Kind of Power

Let’s not forget about the power in saying no.

When you say no you hold up a personal stop sign that lets people know what’s not OK with you.

Steve Jobs used to ask his team how many times they said no in a day. He believed that the more you said no the more focused and productive you would be.

In your career you have had many times when you may have felt you had to say yes for fear of losing out, being looked at badly, being passed up for promotion, etc.

Saying no requires courage very much like saying yes.

And the crazy thing is that when you say no you are really saying yes to something better.

Let’s Make This Week the Week of Saying No

Take a look at your calendar. Are there things on there that you really wish you had said no when asked? Then say no now! Send your regrets.

Say No to a low ball offer.

Say No to a boss who asks you to stay late when you have a previous commitment.

Saying No to an employee who wants to drag you out after work when you know a good night’s sleep is a better choice.

Quick Tip: When someone comes up to ask you for something  and you find you are having trouble saying no directly instead say “Thanks for asking, I need to check into some things and will get back to you by the end of the day on that.”

Then check in with yourself. How does the request feel? Like a Hell Yes or a Hell No?  If it’s a no then say so. 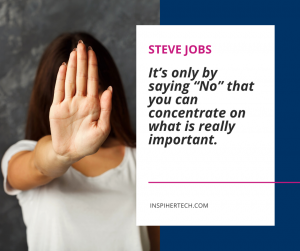