What Do You Really Mean When You Say You Want to Be a Leader?

What Do You Really Mean When You Say You Want to Be a Leader?

I am working with a client on a job search who says she wants a leadership role. She has worked very hard to get where she is today and does not want to lose what she has gained.

And I have been recruiting and coaching long enough to know that clarification is needed.

Leadership is what I call a Green word.

When I was a newbie in my career I was in a meeting with my boss and the rest of our team.

He asked us to say the first thing that came into our heads when he said the word green.

He began to write down our answers on the whiteboard.

What I Think You Think I Think

We each had a totally different meaning for the exact same word.

What I think you think and what you really think are often two different things.

Your definition of leadership might be on the complete opposite spectrum from my definition.

When you run into a green word it is time to ask more questions.

If I take an action based on what I think you think without getting clarity, the outcome can be unsatisfying and a time-waster for all concerned.

How Do You Define Leadership?

Here are some definitions of the word leadership:

Forbes says, “Leadership is a process of social influence, which maximizes the efforts of others, towards the achievement of a goal.”

Harvard Business Review says, “Leadership is the accomplishment of a goal through the direction of human assistants.“

Tony Robbins says, “The definition of leadership is to influence, inspire and help others become their best selves, building their skills and achieving goals along the way.”

Dwight D Eisenhower famously said, “Leadership is the art of getting someone else to do something you want done because he wants to do it.”

Leaders.com states that, “The definition of leadership is simple: It’s the practice of positive influence. “

A leader might be someone who has a team reporting to them.

A leader might be someone who has no one reporting to them yet leads great achievements daily.

A leader might be someone who creates the strategic vision of the organization.

A leader might be someone who is in a position to influence and guide others.

A leader might be someone who is in a position to influence and guide themselves.

A leader might be someone who sets the project direction.

A leader might be someone who organizes the event.

Do you want to become a leader in your career?

Then it is time to get very specific about what being a leader means to you.

Do you want to lead others or just yourself?

Do you want to lead others on projects but not do career development?

Do you love guiding and mentoring the careers of others?

Do you want to lead a small team? A large team?

What influence would you like to have over yourself and others?

Remove the GREEN words out of what leadership really means to you. Then you can confidently go after what you want with no ambiguity for yourself or others.

Are you ready to remove the GREEN from your career reinvention? Sign up for One-on-One Coaching today and get clear about what you really want! 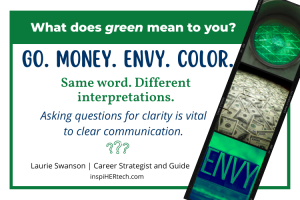