Hey! I Got A Career Situation!

Hey! I Got A Career Situation!

For over a year she was hurt and angry. She did not talk to her sibling.  We heard a lot of reasons why this should not have happened…again and again.

Why she should not be in this situation and why it needed to be different.

Her hurt and anger were completely understandable. This property held many memories for her and her family. She had not been thinking about selling. This was not what she would have chosen.

And then at some point, something shifted.  She began to see past her hurt and anger toward a new beginning. She opened up.

Letting go of her stance of rigidly defending why the situation was unfair and needed to change allowed her to begin to see other possibilities.  Fast-forward three years and she now owns a new lakehouse. It is much closer than her past one which means she gets to go more often. It fits her family perfectly.

She could not be happier. She looks back at the situation that caused her such anger and sees how it actually was a gift.

Do You Have a Career Situation?

Is there a work situation you’ve been griping your friends and family about for too long? (Hint: If you see them walk in another direction at a party, this may be happening).

Do you believe the way your company is doing something should be done differently? Are you losing sleep over it?

Is your boss the problem? And you make sure everyone knows it.

Has there been a decision that you believe adversely affects your future and even Jess, your auto mechanic, has heard why this is unacceptable?

Ask yourself how this situation, that boss, that decision, that process might actually be working for your benefit?
Ask yourself if now is the time to look elsewhere for work. Open yourself up to something new that could be your better-than-before lakehouse.

Are you ready to change your situation by changing yourself? Then sign up for the True Nature Career Coaching today! Sign Me Up 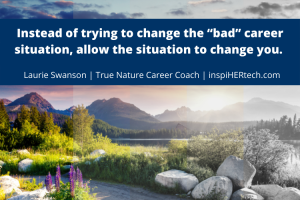