“I Love My Job…But I Love Me More”

“I Love My Job…But I Love Me More”

I am currently working with a high-level software engineer in Silicon Valley who has had enough!

She has been with her current employer for 3 years and consulted with them for almost 2 years before that.

She thrives when solving the hard technical problems. She is their go-to person. She does not disappoint.

And her commitment has earned her big parties, trips to Hawaii and her name on a billboard!

It has earned her the “opportunity” to not only architect the software products but also work on a team of 5 to develop them, lead that team and be on-call for production support. She is regularly working 70-72 hours a week for over a year now with no signs of slowing down.

Then she had a baby and she knew something had to change. She went to her boss and said she would like to work from home 2 days a week.

She was not asking for fewer hours or a reduced workload.

She wanted the opportunity as a proven employee who could be trusted to get stuff done and put in the hours needed to support the small and growing company, to be in the same place as her daughter.

She wanted to spend some of her break time with her daughter.  Feed her. Change her diapers. Hear her cry AND giggle. Memories you cannot get back.

Her boss said no. That she was “essential” to the success of the team. She needed to be there as a role model for the other team members.

Her HELL NO Moment Had Arrived

She gave her two-week notice. Last week was her last week.

She did not get all her ducks in a row.

She did not spend time working on her resume and LinkedIn profile first.

She said enough of this and leaped. She is smart. She is a talented software engineer. She knows she will get a job that brings her CALA (my acronym for Career And Life Alignment).

She has not one regret.

Because that is what someone does who loves their job but they themselves more. 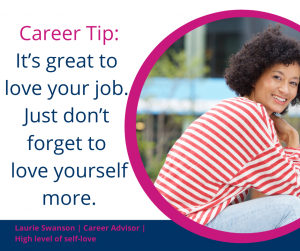