While getting my certification from Cornell in Diversity, Inclusion and Unconscious Bias I learned about a really cool study done by Dov Eden with the Israeli military. He told a group of trainers that the next batch of trainees had been carefully assessed on performance and competence criteria. He then said that the groups had been separated as high potential performers, average performers and some that they couldn’t discern which category they belonged.

The trainers were then given the names of each trainee and the group (high potential, average or somewhere in between) that each person has been assessed to be in and told to train them.

The fact was that No Assessments had taken place. The people had actually been selected for the study because there were no discernible differences between each of them. Basically, they all had the same potential.

Then this person came back and did another assessment of the the groups several weeks later and found the gaps between high potential performers, average potential and the uncategorized were even wider on how each group was performing.

The trainers were letting their biases determine the outcomes. They got what they expected to get out of each person. They saw what the expected to see.

It does not take much to connect the dots between how our expectations of a person based on their age, race, looks, sex, previous performance appraisals and other labels can influence how we interact with them, if we believe they can do a job, who we hire, how we evaluate a person at performance appraisal time, if we recommend them for career advancement.

We all have biases that we carry with us just because we are human.

The Backstory to Biases

Our brains are inundated with information. A study by the University of California-San Diego, under Roger Bon, estimates that people receive 34 Gigabytes of information every day, an amount that could overload a laptop in a week.

The brain needs to have a way to handle all of this data. It creates short cuts. As a young child, as early as two years old if not sooner, you begin to create what I call Nested Data Buckets that you file info in so that you can manage and make decisions in your daily life quickly and with some level of competence.

When you begin to take notice of people and things you start to label them. You then create different buckets in your brain to put data into as you go through your day to help simplify and manage the data.

For example, you will have a bucket labeled human being in order to differentiate a human from, say, a chihuahua.

Now all women with glasses and a bun are in the smart woman bucket.  They get that benefit of the doubt whether it is true or not.

We need to be able to put information quickly into buckets or we would not be able to function.

How you label a bucket and what characteristics you assign to the bucket is determined when we are young by our parents teaching us how they bucket things.  You bucket based on what you learn from your siblings and friends, your personal experiences, and a big one, the media. How people, places and things are portrayed in the media impacts our beliefs and how we bucket.

An example of bucketing is when I was once cornered by a chihuahua! I was about 7 years old and my family and I had gone to visit some friends of my parents. I had been playing outside. I went to go inside to where my parents were and their chihuahua would not let me in the back door. It was growling, its teeth bared! Needless to say, I was scared and did not like that protective chihuahua one bit.

I now have a bias against chihuahuas. I see one and I cross the street. I have a client who has sent me pictures of his beloved chihuahua and it is all I can do to reply respectfully about the object of his affection when what I want to say is “All chihuahuas should be living on Mars”.

Our need to manage information and make decisions is life-saving. A chihuahua could really mess me up! Or it could be my next best friend if I would give one a chance.

Beginning to solve the problem of your unconscious bias

What I did learn about biases in my course at Cornell was that just because you have biases or stereotype people does not mean that you act in prejudicial or harmful ways. The more self-aware you are the less likely you act on your biases. You tend to give people the benefit of the doubt.

Changing your personal biases is not an overnight job. It takes time but as you become more self-aware you will begin to see the power and beauty that comes from inclusion. You will know that you are actually changing the world for the better. 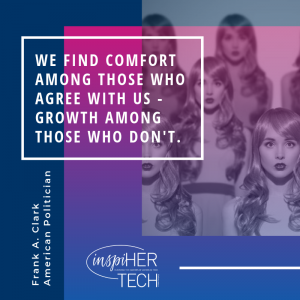