Reinvention From Coal Miner to Coder

Reinvention From Coal Miner to Coder

I was at a holiday party this past week and learned of an organization that helps coal miners retool themselves as computer programmers!

This organization takes coal miners who are out of work or want out of THAT work, puts them through a coding bootcamp, and then sets them up on a project so they can actually use their new skills in the “real” world.

I often talk with people about transferable skills and reinventing themselves for today’s market.

I have always believed that there is a job in tech out there for pretty much anybody.

And the reason you want to find that job is because, unlike coal mining, this is a growth industry!

I graduated from the University of Texas with a degree in Business with an Information Technology focus and began my career as a coder for a software development company. I knew pretty quickly that coding was not for me but I did not want to abandon not only my education but an industry that my mom said was “exploding with jobs”.

I had to figure out a way to align my skills and abilities with the direction of this growth market so I could build a long-lasting career.

That is what I did. I listed out the things I liked to do and was good at doing and then, ironically, I called a couple of recruiting firms letting them know that I wanted a job in sales that involved technology.

They promptly lined up several copier and printer sales roles.

Ahh. No thanks! That was not the technology I was talking about I explained. I had been a coder!

And then one firm suggested I work for them recruiting programmers.

After assuring my mom this was in fact a real job, I began what has become a life-long passion of helping people find the right role and helping companies build a strong team of engaged and contributing technologists and technology leaders.

From Coal to Diamonds

The key is recognizing that you have skills that can be transferred into a role that is aligned with technology.

You do not have to be a coder in order to be a part of this still-growing market.

You can sell. You can test things to make them break. You can design. You can train.

You can work in HR or accounting or administration for a tech company and get paid above the market in most places for a similar role.

Look at your skills, education, and interests and then figure out what companies are doing tech-related things in these areas.

Case in point: I just hung up with a guy who was working for a software consulting firm supporting their Spanish-speaking clients.

His major? Accounting with a Spanish minor.

With the New Year upon us, we often spend time reflecting and looking for areas to change or improve.  Now is the time to think about reinvention. Take yourself from Coal to Diamond by putting the pressure on yourself to go after something in the technology or another growth market using what you already have to offer.

Are you ready for a New Career in the New Year?

Sign up for Take Charge and be both Job Search AND Job Offer ready.. 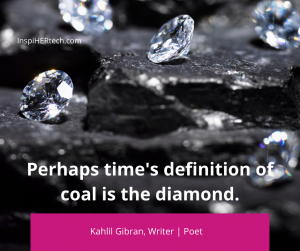