How the Rabbi Brought Career Enlightenment

How the Rabbi Brought Career Enlightenment

Work is very busy. Yes, that is a good thing. Though I am working a tremendous amount this is better than the alternative. In fact, I am so busy sometimes I actually schedule time to breathe in my calendar!

Being this busy and wanting to make sure that we serve our clients at the highest level and not having to say no to a new client in order to do that, I have been trying to decide if it was time to hire another recruiter.

Businesses of all sizes often walk that line between hire and not hire. Never an easy decision especially as a small company…without a working crystal ball.

Then I remember something a candidate I worked with on their job search had said to me when she was faced with a similar hard decision.

She had been thinking about the possibility of changing employers. She loved where she worked, the people she worked with and the work she did. It was not that she did not feel her career was moving forward. In fact, she was a star with a great career trajectory.

The reason she was toying with the idea of leaving a company she loved was because she thought she might enjoy going part-time for a while. She wanted to create some time for herself to breathe. Time to enjoy the few years before her kids were off to college. More time with her husband, her friends and her parents.

She was nowhere near retirement age so that was not an option. She wanted to keep doing similar work as an IT project manager who built and managed IT teams and projects. She also was making a nice salary and her family relied on her contributing a substantial income.

Working at the local coffee shop was not going to cut it.

When she and I first started talking about this part-time idea I suggested she speak to her current employer about doing just that. They knew her, they trusted her. If anyone was going to be willing to take her on as a part-time project manager it would be them.

After several creative and very open discussions about how it might work, her employer’s answer finally landed on no. They were a professional services firm and though they would love to say she could work for their clients part-time they could not guarantee it. The clients’ needs would have to come first.  She understood and actually agreed.

So, I began to keep my eyes and ears open for a company looking to hire an excellent project manager part-time. No easy feat. These types of jobs were, and are still, few and far between.

And then I found one!  Even better, it was with a large corporation that was not far from her home. We were both stoked. She interviewed and they loved her. She loved them. The work was exactly what she had been doing though it was working on internal projects which gave her more flexibility to determine her schedule and she could also share a project with another manager if needed.

The money was her salary cut by 50% because she was going to work half time. She had anticipated this from the beginning and was happy with this arrangement.

She was excited when she received their offer.

This Sh*t Just Got Real

And then she got scared. She was not sure if this was the right choice.

She knew this was almost a once-in-a-lifetime opportunity yet it was not an easy choice.

Now that this was a real option, she thought of things she had not thought seriously about before.

But when she put her head down on her pillow at night, she felt the excitement of the plans she was already making for Friday lunches with her parents and Tuesday outings with her kids.

What was the right choice?

Enter the Rabbi and Career Enlightenment

She decided to take this big question to her rabbi who offered up some sage advice that not only helped her but has helped me over the years when I am at a crossroads.

Her rabbi essentially told her that in life you can’t always know an outcome. You can’t know right or wrong, good or bad. Sometimes you take a breath, make a choice and THEN make it the right one.

She gave her notice from a place of peace and I am happy to report that she is still with the same company working part-time for over a decade. She is well-respected, gets some of the best projects, has built fantastic relationships and has no regrets.

She made the choice then made it the right one. 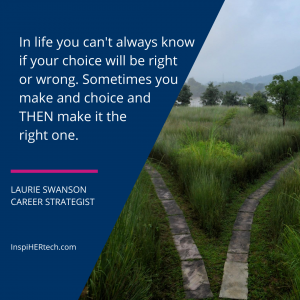