I walked out of the post office looking through my mail. I reached to open what I thought was my car door and realized I was at the (very similar) SUV parked in the spot next to mine. I immediately apologized when I saw I had startled the car owner who was sitting in his car looking at his phone.

And then it happened.

Through the closed car window came a barrage of swear words, name calling and hand gestures.

A woman walking by who witnessed the whole thing said “Wow. You just made a mistake”.

That is right! His reaction was way out of line. What an asshole!

Then, a few days later, I received an email from someone who basically told me what they were going to do and then what I was going to do.

My first reaction was “Hell no! You do not get to tell me what to do!”

Things May Not Be As They Appear

Then I had a thought.

Maybe what was written in her email and what I read, though the same exact sentence, were actually two totally different things.

Maybe she was not trying to tell me what to do. Maybe she was letting me know what was going on from her end and how things were likely going to unfold. Perhaps she wanted to make sure that I knew how this might impact me even though her email did not fully express it quite that way.

And maybe the guy in the car on his phone just received word that he was going to have to let 50% of his team go. When I grabbed his door handle he unleashed all the pressure he was feeling, and I was the recipient.

I’m not saying that going ballistic or not thinking through how an email is going to be received is OK.

The point is that we cannot know what else might be going on with the people we interact with on a daily basis especially now. Practicing high levels of empathy, putting ourselves in their shoes, is how we can take responsibility and not elevate our own stress levels.

Or, as my husband said, “Maybe you need to pay attention to where you are going”. There’s that.

Understandably, nerves can be amped up right now with the reality of working from home, added financial stress, having to make hard decisions, figuring out how to do things you may not have done before like Zoom or the getting a loan through the PPP.

High stress is like another symptom to this virus. And the chance of being misunderstood is higher in times of high stress.

So, this week I simply want to say assume goodwill.

When you read something that ruffles your feathers, take a breath and ask yourself what they really meant to say here?  Get clarification if needed or ignore it and do whatever needs to be done next.

When someone overreacts remember that not all of that is about you. Send a silent prayer of peace, let them vent and move on.

No one is misunderstood when offered a little grace and goodwill. 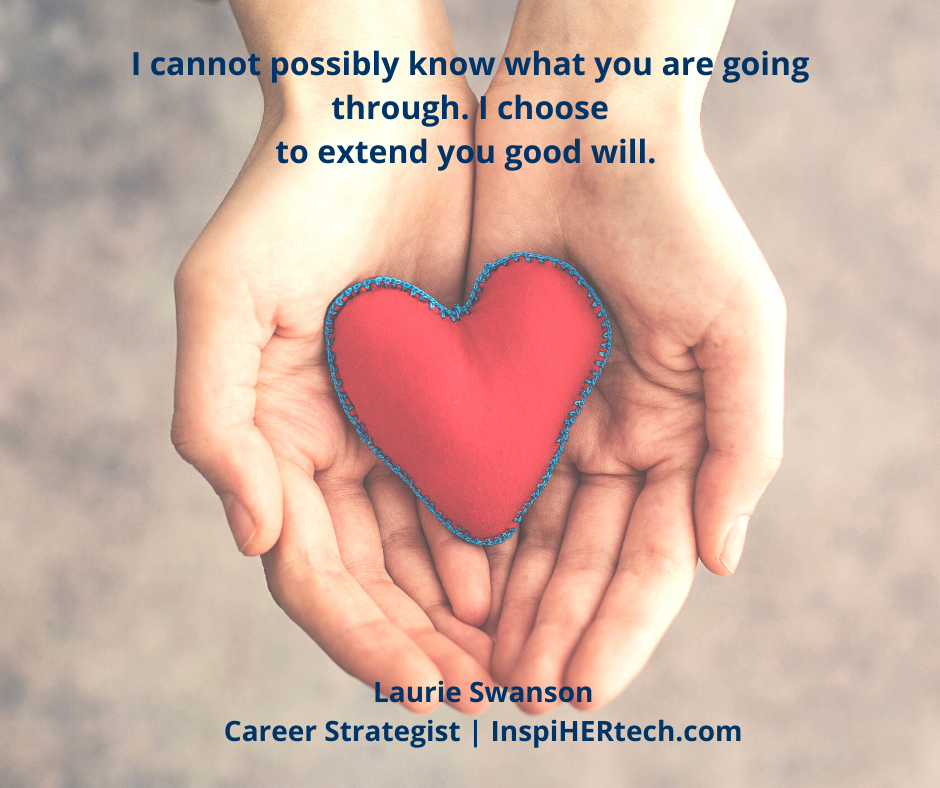